“I am powerful because I have the ability, heart, and passion to empower women in the Rio Grande Valley community. I think every woman is important and has enormous value and has the ability to change the circumstances of their lives despite the limitations and barriers that each one may have.”

That’s how Lucy Ceballos Félix describes her work as an activist and social justice leader in the Rio Grande Valley of Texas, where I had the pleasure of spending International Women’s Day earlier this year. While working as a promotora, or community health promoter, for the city of Brownsville, Lucy heard story after story of women not able to access health care for serious problems like cancer, tumors, and hemorrhage. They couldn’t get appointments for months or were told there were no specialists available. These women are poor, and some are undocumented. Many work multiple jobs. They are mothers, wives, daughters, sisters.

Outraged by what she heard, Lucy began organizing women in the Rio Grande Valley to advocate for better access to basic health care and more dignified treatment on immigration issues. Then, in 2011 and 2013, votes by the Texas legislature resulted in reduced family planning funding and forced clinics to close. Thousands of women lost what little access they had not only to contraception and abortion care but also to cancer screenings and other preventive health care.

Hundreds of people from all walks of life came together to promote salud, dignidad, y justicia—health, dignity, and justice. The events were brimming with hope and courage. But what struck me most about the day was the collaboration that made them possible. Three entities with different strengths and tactics—the Texas Latina Advocacy Network, NLIRH’s national team, and the Center for Reproductive Rights— came together in a long-term partnership to shed light on the plight of women in the Rio Grande Valley.

Their partnership is a case study in what effective collaboration looks like, and what it can do for a movement. By working together, the voices of local women have been heard on a much bigger stage; the national organization was able to connect its community work with a national and international audience; and the legal team working to secure women’s rights across the globe has found a community that is eager to implement the human rights framework in a U.S. context.

In talking with people involved, there were four characteristics that emerged as central to the collaboration’s success:

Long-term relationships. NLIRH has been working in south Texas for nearly ten years, building relationships with the local community and helping local activists develop resources and infrastructure. CRR and NLIRH also have had staff and board members in common for several years. These long-term relationships meant that they were in regular contact and knew what the others’ interests and priorities were.

Trust. Long-term relationships help build trust, but so do small decisions made along the way. Ceding power when you know you are not the strongest player and sharing power when you are both build trust. For example, when developing materials for the International Women’s Day events, the groups decided that CRR’s communications team would take the lead because they have more capacity. However, the designs and messaging were guided by NLIRH because they better understand the local context and community.

Time. Developing long-term relationships and building trust take time: time to stop and think about who may not be essential to this particular campaign but will strengthen longer-term efforts; to reach out and pull in people who may have more sophistication or skills; for regular and ongoing check-ins about work and priorities. Taking the time to connect pays off.

Specific joint projects. The first official collaboration between the Center and NLIRH was a report documenting a human rights fact-finding mission in south Texas. Starting with a specific project, the two organizations saw an opportunity for broader collaboration that would make a deeper policy impact while amplifying the local activists’ campaign. 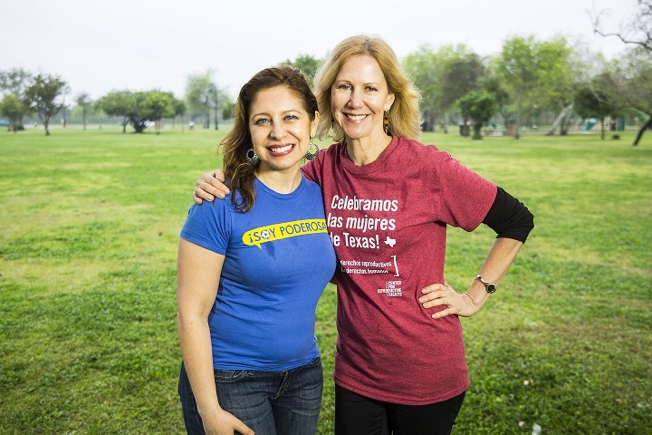 The other theme that emerged implicitly in all of my conversations was a sense of shared values. As Jessica González-Rojas, head of NLIRH, said, “All three entities make sure women are at the center of the effort—it is coming from the community. The power of storytelling from within the community advances the work of all of us. That is the shared value in this collaboration.” Nancy Northrup, head of CRR, put it even more bluntly: “We want the voices of the women and their families who have suffered the brunt of this health care crisis to be heard and expose these state policies as the human rights violations they are.”

Shared values are particularly important in the fight for reproductive rights in which short-term efforts do not always translate into long-term movement building and can, at times, hinder it. Successful social movements build and leverage power from within and without. Civil rights, gay rights, and women’s rights efforts have been successful not just because of committed individual activists. They also worked with allies who were in positions of power to influence policy change at a higher level, and they gave voice to those most directly affected by injustice. They focused on both policy wins and building a powerful movement.

I left Texas inspired by the women who shared their stories, and feeling hopeful that the reproductive rights movement will triumph over the relentless assault on women’s autonomy and opportunity. With more collaborations like this one, this movement can only grow stronger.