Why we fund open textbooks (and plan to do more)

Textbooks aren’t new or novel, and they certainly don’t represent the cutting edge of the Open Educational Resources (OER) movement that the Hewlett Foundation has long supported. But it’s precisely because of the way they are deeply embedded in the education system that they have the potential to shift OER from the exception to the default in schools and colleges across the world. And make no mistake: OER is poised for widespread adoption, with research showing that nearly 10% of K-12 teachers and over 10% of higher education faculty in the United States regularly use OER in some form. That realization, which heavily informed the strategic planning process we began when TJ Bliss and Dana Schmidt came on board as program officers for OER, formed the basis of our revised strategy for OER. This strategy will focus on supporting the development and adoption of open textbooks over the next three to five years while also maintaining a robust infrastructure for the OER field until it becomes self-sustaining. We’ve gotten enough questions about this decision from grantees and colleagues that we thought it was worth explaining in more detail with this blog post.

Three big trends are driving our push for open textbooks. First, millions of college students today are crushed by debt brought about by the high cost of education. Open textbooks can play an important role in solving this problem (particularly for community college students, where textbook costs can be as much as 40% of the total cost of a  student’s education) by reducing the costs of instructional materials. Many current digital support tools (like learning management systems and assessment platforms) are bundled with printed texts that students can’t afford, but the vast majority of educators and students still need the content from those textbooks. At the same time, as a result of years of investment by private foundations and government, a supply of less expensive, high-quality open materials does exist, and they are more flexible than proprietary textbooks and more easily updated. They’re better for students, and more empowering for faculty.

Second, while new digital support tools are rapidly appearing in the market, educational technology depends on quality content to meet curricular requirements. The deployment of open content in these new tools can lower overall development costs, which can then speed time to market and keep costs low for students. Supporting the development of open textbooks is a key requirement to achieving the digital promise of tomorrow.

Third, schools with the largest populations of disadvantaged students have neither the infrastructure nor the funds to take advantage of the latest education technology. These schools still purchase textbooks and are likely to do so for many years to come. Open textbooks, while looking toward the future, meet the needs these schools and students have today.

Indeed, there is a desperate need for open textbooks. In the K–12 world, the gap between textbooks aligned with high standards and what is actually available has widened considerably. For example, EdReports, a new organization that we have supported to serve as a type of Consumer Reports for education, has documented a significant lack of alignment between the most-used math textbooks and the new Common Core State Standards they are supposed to cover. In community colleges, textbooks make up to 30 percent of the costs of a student’s education. In many cases textbooks are so expensive that students simply forego their purchase, diminishing their educational experience and chances of success.

By contrast, openly licensed materials are hitting the mark and filling a market niche. EngageNY has developed openly licensed educational materials that have been vetted for quality by the authors of the Common Core State Standards. These resources have been downloaded over 24 million times and teachers around the country have independently cited them as providing valuable support in the shift to new standards. Similarly, OpenStax College, which creates openly licensed textbooks for college courses with the highest enrollment, has already experienced significant market penetration, achieving mainstream use in 20 percent of all Title IV institutions despite virtually no marketing.

So open textbooks are clearly good for the education system as a whole, but is this the best focus for OER? After all, improvements in materials alone will be much less effective without better and more open pedagogy, and textbooks are fairly U.S.-centric while OER is a global movement. We recognize that there are many other cutting edge ways in which OER could contribute to solving serious problems in the education world. So why continue supporting open textbooks when it is very possible that “the textbook” will not be the primary form of content delivery in the digital future? 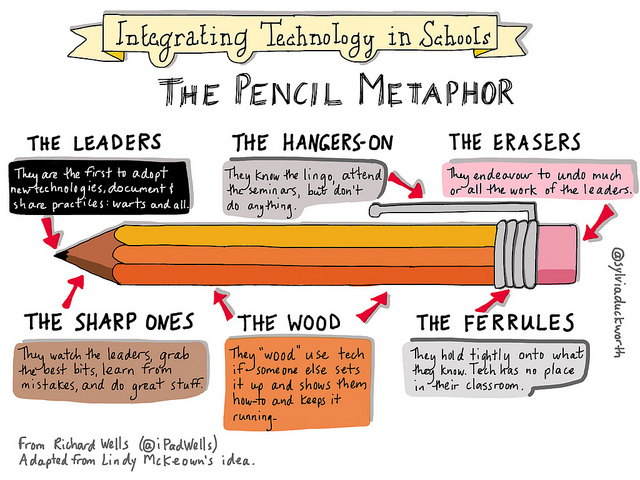 Looking at this question from the vantage of the OER movement, we believe that it is precisely because textbooks are not new or novel that they carry within them the seeds of change that could help OER cross the innovation chasm and jumpstart widespread mainstream adoption—moving solidly into “the wood” in the pencil metaphor of school technology integration pictured above. In K–12, states and districts allocate funds to purchase textbooks, while in higher education, faculty assign textbooks for students to buy. In our home state of California, textbooks serve a critical articulation function between community colleges and four-year colleges. Textbooks also serve as a means of fulfilling K–12 educational equity requirements as dictated by the landmark Williams settlement. In other words, textbooks are solidly within the workflow of the education system. And focusing on something that offers a solution to problems that are widely recognized within the education system itself represents the best opportunity for mainstream adoption of OER.

As we’ve considered the range of options where OER could make a meaningful difference, we’ve been weighing four core areas:

In our view, a focus on open textbooks in the near-term meets all of these criteria. The benefits are widespread. For example, a recent U.S. PIRG report estimates that if every full-time undergraduate student had just one of their traditional textbooks replaced with an open textbook each year, it could save students nationally almost $1.5 billion in textbook costs.

Evidence shows that OER can reduce costs while maintaining education quality. A rigorous study published in Education Researcher last year found that students who used open science textbooks in Utah high schools performed better than students using proprietary science textbooks. Amazingly, the open textbooks cost about $5 per student while the proprietary textbooks cost $75 per student, which demonstrates remarkable learning outcomes per dollar. Research on OER in higher education is also fairly consistent in finding that OER decreases costs without negatively impacting learning. For more information on the mounting evidence, see the “Review Project” by the Open Education Group, which provides a summary of all known empirical research on the impacts of OER adoption, or check out the “OER Evidence Report” recently published by the OER Research Hub.

Philanthropy can play a catalytic role in pushing OER as a solution to the real problems the education system is experiencing today. Given the growing availability of OER supply, the costs of advancing open textbooks is relatively small as it consists of making policy efforts, filling gaps in supply, marketing, and building awareness.

We recognize that there is a long list of other areas related to OER where our funding could make a significant contribution. These are all within our sights. But for the next few years, we believe open textbooks represent the greatest promise for mainstream adoption of OER.

Education
What if classrooms were rooted in care?