Sharing the benefits of open educational resources with everyone

One of the best things about working in philanthropy is the chance to get in on the ground floor of great ideas. Even better is watching those ideas grow into something unanticipated, something bigger and better than anyone foresaw or expected at the outset.

That field still includes MIT’s vibrant OpenCourseWare, which today averages a million visits each month. But it also includes a host of other organizations the Hewlett Foundation has been privileged to support and, in many cases, to help launch—such as Creative Commons, whose open licenses now ease access to over a billion pieces of content that otherwise would be locked down tight; or OpenStax at Rice University, whose free and open textbooks are used, reused, and repurposed in more than 1,000 college courses around the world. More gratifying still is how far the OER field has grown and matured beyond what we at the Hewlett Foundation support. Other funders have joined, (though still too few given the field’s needs and opportunities), and public agencies have begun stepping up as well, like South Africa, whose government has distributed open textbooks to every public high school in the country. A study we recently commissioned from the Boston Consulting Group indicates that approximately ten percent of K-12 educators in the United States now use OER as a primary resource.

OER didn’t grow from a single experimental grant to a global movement overnight. It developed gradually, as a small but steadily increasing cohort of farsighted educators came to see its benefits, which are broader and more profound than many people realize. After all, OER can do much more than just reduce costs, though certainly it does that. Openly licensed materials empower teachers: unleashing their creativity by enabling them to customize courses in ways that deepen both their own engagement and that of their students. And the benefits for students are even greater. Clearly, open resources increase students’ access to knowledge, just as the recipients of that first grant at MIT hoped they would, but there is growing evidence that effective use of OER also improves critical student outcomes—everything from test scores to college enrollment rates. “No brainers” are incredibly rare in education, where strongly held, widely disparate values all-too-often stymie potential reforms. Well, OER is a no brainer.

Still, that ten percent of K-12 educators are using OER means 90 percent still are not. Can we change that? Can OER become the materials of choice for mainstream teachers? Just a few years ago, when OER was still in its infancy, such a question would have seemed ludicrous. Even now, the idea that OER could be the norm seems crazily ambitious. But research in other domains has shown that innovations often tip from early adopters to mainstream use once they hit 15 to 20 percent of market share—a level of use that seems sufficiently widespread to get all but the stodgiest holdouts to consider trying something new. We are, in other words, already close. Our refreshed grantmaking strategy, which we release today, is designed to reach that next, critical tranche of potential converts. It will do so by focusing on particular problems and challenges for which OER provides an especially promising solution—from the out-of-control rise in the cost of textbooks to the provision of educational materials in the developing world. We will, at the same time, continue to support the sort of robust infrastructure needed for OER to facilitate still more innovations in educational practice.

The benefits of using OER in the classroom are too great to be embraced by only a forward-thinking few. They should be shared with everyone. 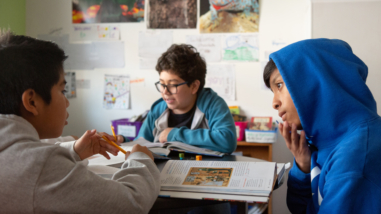