Promise and progress on family planning in Francophone West Africa

The nine countries that comprise Francophone West Africa have some of the highest maternal fertility rates, lowest contraceptive rates, and highest number of maternal deaths of any region in the world. Yet they receive less investment from international donors—particularly for family planning—than other regions in sub-Saharan Africa.

The Hewlett Foundation gave an initial grant to organize the “Population, Development, and Family Planning in West Africa: An Urgency for Action” conference in Ouagadougou, Burkina Faso in February 2011. The conference launched the Ouagadougou Partnership between governments, donors, and technical partners to increase family planning use in Benin, Burkina Faso, Côte d’Ivoire, Guinea, Mali, Mauritania, Niger, Senegal, and Togo.

Since then, our strategy for reproductive health in Francophone West Africa has focused on supporting this kind of regional collaboration, increasing contraceptive use, providing better data on the extent and impacts of and reducing unsafe abortion, and strengthening in-country advocacy.

What are the challenges to reproductive health and family planning in Francophone West Africa?

It’s hard to overstate the challenges Francophone West African governments face in meeting the needs of their populations. All nine Francophone West African countries—Benin, Burkina Faso, Côte d’Ivoire, Guinea, Mali, Mauritania, Niger, Senegal, and Togo—are among the 25 least-developed countries in the world. And they have some of the highest fertility rates, ranging from four births per woman in Togo to seven births per woman in Niger.

Lack of government and donor resources combined with governance challenges mean the health infrastructure struggles to keep up with primary care demands and there is a limited private sector for health. Most people in Francophone West Africa also express a desire for large families, making it a strong social norm to have many children.

Despite what I’ve laid out as a very complex environment for family planning and reproductive health, the data also shows that there are many women who, given the opportunity, may choose to use contraception to space or limit their births. When I’ve visited with Marie Stopes mobile outreach teams in countries like Burkina Faso and Senegal, I’m always amazed by the number of women that show up for services, most of them with small babies in their laps.

What makes you optimistic about family planning in Francophone West Africa?

I’m optimistic about the way the Ouagadougou Partnership is tackling these challenges collectively to create significant momentum for family planning. The partnership today is a collection of the nine French-speaking countries in West Africa and a group of committed donors, including the Hewlett and Gates foundations, the U.S. Agency for International Development (USAID), the United Nations Population Fund (UNFPA), the French Ministry of Foreign Affairs, French Development Bank, the Dutch government, and Global Affairs Canada. Its goal is to reach 2.2 million additional women with contraception by 2020, with the theory that intentional collaboration among donors, increased funding, and friendly competition on results among the nine countries will get us to that goal.

It can be difficult to put a value on coordination and collaboration, so we were pleasantly surprised that Global Impact Advisors’ evaluators emphasized its value in their report. They said the donors, grantees, and other stakeholders they interviewed were “nearly unanimous in their perception that the establishment of the Ouagadougou Partnership had created significant momentum for family planning within the region.” 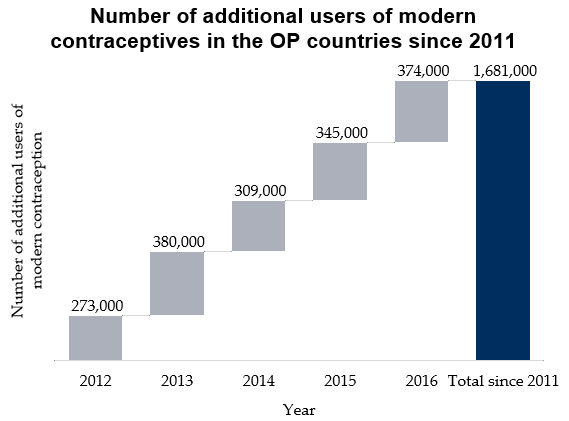 The majority of interviewees credited the partnership for a 36 percent increase in donor funding for family planning in Francophone West Africa and helping 1,681,000 additional women use modern contraceptive methods. Since 2011, the partnership has provided contraception to as many women in the last six years as had been served in the previous 21 years.

We also hoped the partnership would generate healthy competition between countries. For example, if Guinea sees that Senegal has just allowed women to self-administer a new injectable contraceptive, Guinea would likely be interested to explore how they can follow Senegal’s lead. The evaluators said this is happening. One of the grantees interviewed said “It is no longer donors who are questioning them,” but instead it “is other countries.” This is “bringing the dialogue where it need to be, within Africa.”

How did you engage religious leaders as proponents of family planning in Francophone West Africa?

Religious leaders have a significant role in whether or not women use contraception, both through teaching and setting social norms. Historically, USAID and other donors have worked with Islamic religious leaders at the community level to use their voices to share the benefits of family planning for women and families. We’ve taken a slightly different approach in working with faith leaders. In Senegal and more recently in Guinea, we’re supporting the World Faiths Development Dialogue to bring the leaders of the influential Muslim brotherhoods in those countries to talk about the importance of family planning and to be more active in engaging with the government in planning those programs.

The local organization created with our funds, the Cadre des Religieux pour la Santé et le Développement (CRSD), is the first nongovernmental organization in Senegal designed to engage faith leaders with the government to address social issues. And it’s been important as a funder to let CRSD lead in identifying the right strategies to introduce the topic of family planning in faith circles, particularly with the leaders of the religious families, who often have a strong belief in large families.

What else did the evaluation tell you about Hewlett’s reproductive health strategy in Francophone West Africa?

There are a couple of big takeaways for me from the evaluation. First, collaboration is powerful. The benefits of working as a collective of donors, governments, civil society organizations, faith leaders, and implementing organizations is that each has a comparative advantage in tackling the challenge of increased family planning.

Second, the evaluation says our biggest advantage is our relative flexibility, speed of providing funding, and risk tolerance. But more important was using these 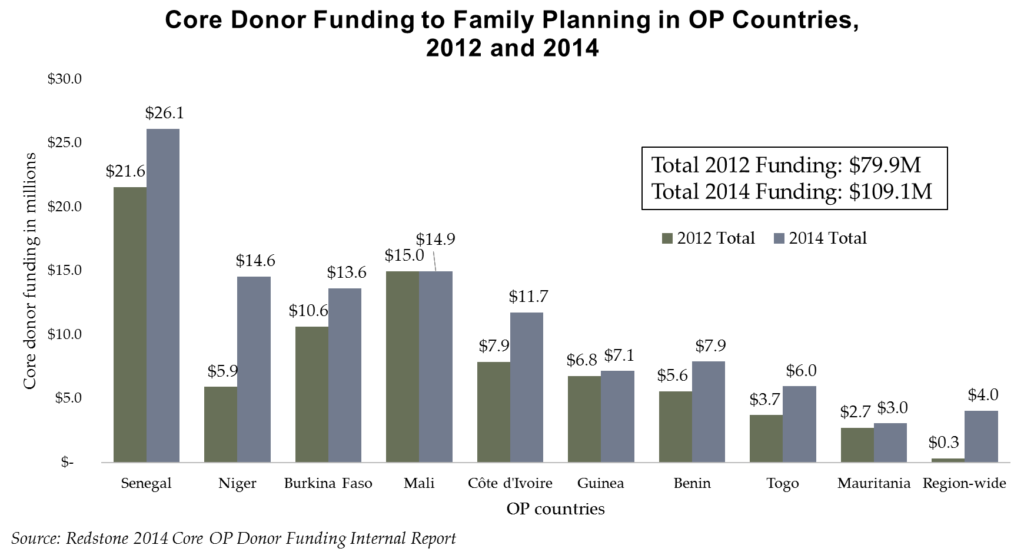 attributes to leverage more resources, government leadership, and technical support than we could have ever done on our own. The evaluation quotes another donor who says:

“Given the resources available, we should look at the role Hewlett played through the Ouagadougou Partnership as an example of punching above your weight. The resourcing Hewlett has… is tiny compared to need. The dollar amount is a fraction of what the big foundations can provide, and then just a fraction of what multilaterals and bilaterals can provide. So what Hewlett did in terms of leverage, was a great buy for them. They used it as a platform to convene others [and as a] catalyst of attention to [a] neglected region.”

We think there are a lot of donors who could punch above their weight in similar ways. We’re working on the theory that donors need to better coordinate to maximize the impact of our resources and as a way to more closely align funding with the countries’ own priorities.

Third, as most of the countries in Francophone West Africa have highly-restrictive legal contexts in terms of abortion, much of the foundation’s work to date has been funding research to generate evidence about the extent of the problem. We still think that the sub-region needs more quality data about the extent to which women seek abortions (which, in most contexts because of the legal issues, is considered unsafe). In addition to focusing on generating evidence for policy advocacy, the evaluation also suggested we have a role to play in increasing the quality of post-abortion care services.

Finally, in terms of service delivery, the evaluation pushes us to focus on our role as a catalytic funder as opposed to focusing on numbers or scale, the type of impact that is better suited for larger funders (e.g., USAID). The evaluation cited the foundation’s innovative work in consumer insights and providing flexible support to our service delivery grantees to develop strategies and programs for Francophone West Africa as ways that our funding could have an outsized impact on service delivery.