10 ideas from pathways out of poverty

Editor’s note: This essay is part of a series of symposium reflections.

Educate girls or help women have the number of babies they want?  Make it easier for businesses to expand or give poor people cash?  Advocate for more philanthropic funding or use your own resources on new ideas that you think have a chance of improving the lives and livelihoods of people living in poverty?

Those were the questions that about 300 philanthropy and nonprofit professionals wrestled with while playing the Gelt Complex, a simulation game we used in the “Pathways Out of Poverty” panel discussion at the Hewlett Foundation’s 50th anniversary symposium. They are also, in overly simplified form, the type of questions we struggle with every day in our jobs working in global development. 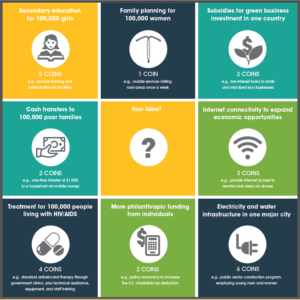 We didn’t have to make players read the tax code to get across the essence of foundation work.  We just handed out grantmaking money to each player around a 10-person table – in this case, chocolate coins (a.k.a. Hannukah gelt) – in amounts ranging from one to 10 coins.

We asked them to figure out how to allocate their resources in the best possible way to combat poverty.  The programs they could choose from, shown on the game board, ranged from one to six coins, so that some were easier for a small giver to support, while others required either the chocolate equivalent of the Gates Foundation or a collaborative effort.  The rules were so loose that they could even forgo the charitable objectives and gobble up the coins themselves.

Despite how simple-minded it seems, each player had to think through key dimensions of grantmaking:  our time horizon, the outcomes we think are most closely related to combating poverty, our belief – based on evidence or just guesses – about whether a particular programmatic approach will obtain the outcomes we’re hoping for.

Along the way, players had to figure out whether they would collaborate or not, out of a collegial spirit or necessity. They had to make decisions on the basis of limited information, harkening back to underlying theories about how societies work – and values about how societies should work.

This was a 20-minute exercise, which seems like an absurdly short amount of time to derive any insights. But here are some things I saw and heard as I wandered from table to table, and I’m sure there were more.

Innovation takes time, and risks are hard to calibrate

One table seemed to spend all its time coming up with entirely new ideas, with each person trying to convince the others that the concept was better than the bread-and-butter anti-poverty programs on the game board.  Part of the discussion centered on estimating the cost of new things, relative to the old ones.

Another table was intent on optimizing as a group, insisting that everyone agree on the allocation.  They, too, hadn’t even started to lay down their coins until the two-minute warning (“it’s almost the end of the fiscal year”).

When you’re big, collaboration is a courtesy

Some of the people who had, by luck, gotten a lot of coins were able to pursue their ideas without consultation at all.  They just did as they pleased.

Being a small player can be a bummer

Others who had, by chance, gotten very few coins found it hard to figure out what to do.  If they joined in with others, they didn’t feel like they were making much of a contribution.  But the options with relatively small price tags didn’t always seem like they’d have long-term benefits.

But then there were the players who didn’t have many coins, but instead they had ideas.  One, a leader in one of the Performing Arts grantee organizations, convinced everyone else at the table that each option would be better if an arts and culture dimension were integrated into it.

One player, a local grantmaker, refused to participate because he didn’t know the context.  In his view, it was not worth spending one chocolate cent in the absence of deep knowledge of the people and the place – and could even do harm. Fundamental beliefs about how philanthropy works and the role of outsiders are powerful. And if we ever do the game again, it might be better to situate the decisions in a geographic context.

It’s hard to do anything outside the system, which is often broken

On a related note, at least one table struggled with the idea of funding only girls’ education in the absence of wider investments in better governance.  The question they raised is how many inefficiencies would introduced by public sector failure.

We like to talk about big bets, but the opportunity cost is high

The vast majority of tables spread their bets, opting for a range of programs rather than only one.  In some cases, there was an underlying theme – “give to benefit girls and women because they are the change agents” or “combine education, business subsidies and infrastructure for economic growth and employability” and in others the distribution seemed simply to be the product of varying views about what’s likely to work.  In other words, it’s no surprise that foundations like ours have programs, components, sub-components and multiple grants across a portfolio.

Warming up to the direct cash model

Almost all the tables allocated some of their funds to cash given directly to poor households, as one of the panelists, Paul Neihaus, advocated.  He’d proposed that cash to the poor be the default, although that didn’t seem to be how most of the groups behaved. But they certainly heard that the GiveDirectly model proposed by Paul might be a sensible use for some of the money.  I saw at least one person who opted for putting his last coin on the “cash” square just as time ran out.  It seems handing out cash, disintermediated and separated from expert views about what would be best for the beneficiaries, may be an idea whose time has come.  Especially when you haven’t quite hit the year’s payout target.  (To learn more:  “Definitive Data on What Poor People Buy When They’re Just Given Cash” or “The Economist’s Christmas.”)

And my personal favorite:  Our own board member Walter Hewlett spent part of the time aggressively lobbying to hand out more coins from the stash in the basket. The problems are big ones; we need all the resources we can get.