Watching over the bright lines of democracy

What are the key elements of democracy in the United States? How are they faring under the current strain? These are big, difficult, and alas all too relevant questions. The Bright Line Watch project monitors perceptions of a core set of democratic principles or “bright lines” and now has three years of data to illuminate how different groups see them holding up – or not. What the data reveals about attitudes towards political compromise and the patriotism of political opponents is particularly worrying to me—and part of what we must continue to reckon with amidst the ever-widening political polarization in the United States.

Bright Line Watch’s enterprising group of scholars, including John Carey, Gretchen Helmke, Brendan Nyhan, Susan Stokes and a small team of researchers, ground their work on two foundational assumptions about democracy and the rule of law:

When both conditions prevail, they argue, elites will be hard-pressed to persist in any violations of a democracy’s bright lines.

Beginning in February 2017, with support from the Hewlett Foundation’s Madison Initiative and our partners at the Democracy Fund, Bright Line Watch has conducted recurring surveys of academic experts and the public at large to assess respondents’ views on how our democracy is faring overall and on how 28 specific bright lines are holding up. The bright lines span a range of topics, including, e.g., fraud-free elections, toleration of protests, constitutional limits on executive power, sanctions for misconduct, and judicial independence. This approach has allowed Bright Line Watch to identify differences between expert and mass opinion, and between citizens who approve or disapprove of President Trump.

While there have been fluctuations across nine waves of surveys, some patterns have emerged. There is general alignment – between experts and the public, and between Trump approvers and disapprovers – on the relative importance of different democratic principles. For example, all groups have ranked fraud-free elections, equal voting rights, and equal political / legal rights as three of the most important principles.

With respect to how our democracy is performing, there is good news and bad news. Let’s start with the good news. While academic experts have consistently held a slightly more favorable view of American democracy than the public at large, and members of the public who approve of Donald Trump have a more favorable view than those who oppose him, in aggregate, none of these groups are seeing an overall trend of democratic backsliding, as indicated in the chart below from the most recent Bright Line Watch report. 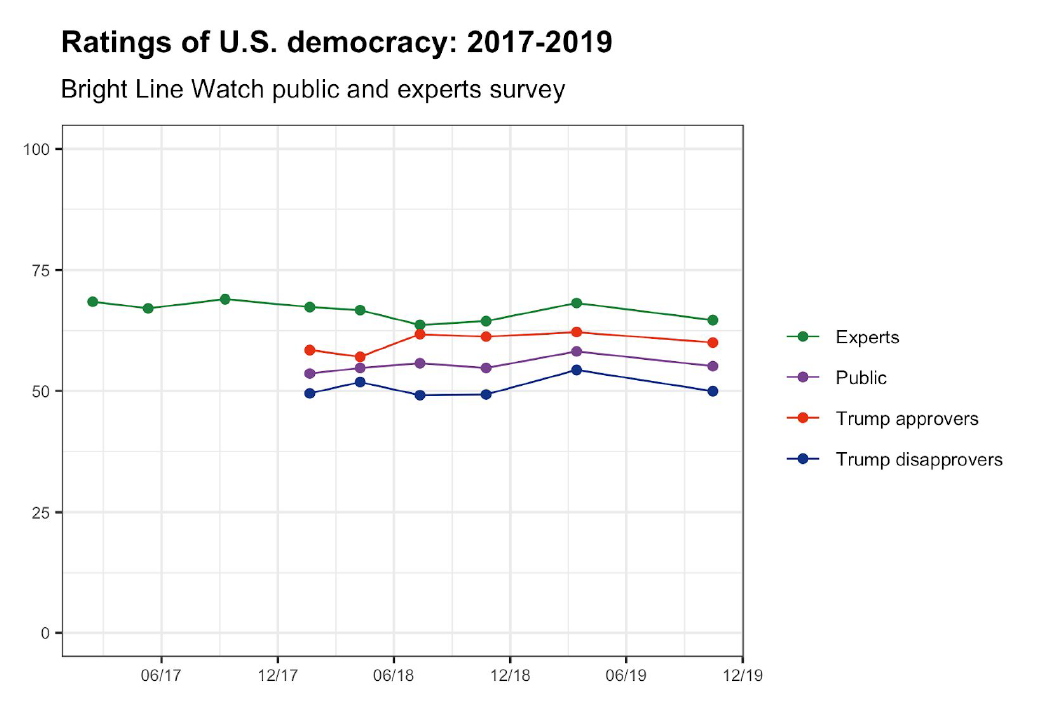 That said, on certain bright lines, respondents do perceive substantial declines in performance. The principles for which the declines have been the steepest include constitutional limits on executive power, the impartiality of investigations, and no foreign interference in elections.

Bright Line Watch is also surfacing important differences between those who approve and disapprove of President Trump on the realization of several principles. Principles where the partisan perception gap is the widest include equal voting rights, constitutional limits on executive power, no foreign interference in elections, and no interference with the press. Those who approve of the President are much more likely to see U.S. democracy as meeting these standards than his disapprovers are.

One implication of this divergence is that it is necessary but insufficient for Americans to agree on the importance of bright lines in our democracy. If we disagree about whether they are being crossed, it will be easier for the transgressors to succeed in their line crossing. Polarization thus leaves a door swinging open through which our democracy can backslide.

On this last point, I have been especially concerned about the beleaguered status of two principles in the Bright Line Watch surveys: “elected officials seek compromise with political opponents” and “political competition occurs without criticism of opponents’ loyalty or patriotism.”

These two principles are noteworthy in part because all the groups surveyed have consistently ranked them at the bottom of the list with respect to performance. As indicated in the chart below, in the most recent survey roughly 10% of experts and 25-30% of the public see these principles as being “fully” or “mostly” met in our democracy. 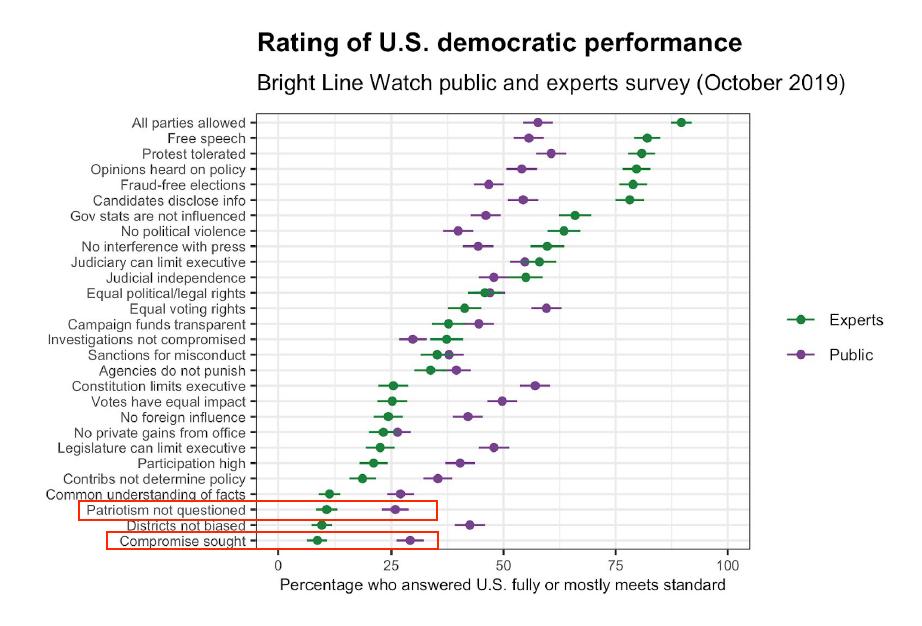 Maybe this is not a problem, as experts and the public also see these principles as the least important of those covered in the Bright Line Watch survey. Fewer than 50% of experts and 60% of the public regard seeking compromise and accepting opponents’ patriotism as “important” or “essential” for democracy

I certainly won’t quibble with the dismal performance assessment. Compromise has become a dirty word in both parties, and elites and activists now routinely question their opponents’ patriotism – not just rhetorically, but with a vehemence that indicates they really believe the charges they are leveling.

I also understand why these principles might seem less important. Relative to the concreteness of a fraud-free election or equal voting rights, they are diffuse and intangible. However, from a different vantage point, these principles are arguably the most fundamental to the health of democracy in the US.

Recall that the Founders’ plan for a republican government on a continental scale intentionally encompassed competing and, in some cases, irreconcilable values, beliefs, interests, and agendas. They meant for the sheer diversity of viewpoints to limit the extent to which any one could dominate. Robust political opposition is thus not illegitimate but rather an inherent and animating feature of our system.

Moreover, our Constitution channels all this disputation into a complex set of institutions that separates, checks, balances, and decentralizes power. These arrangements presume that officeholders will not only forcefully defend and advocate their positions, but also negotiate and compromise with each other – not because they necessarily want to, but because they need to for our system of government to work.

From this vantage point, then, we might view a willingness to compromise and the legitimacy of political opposition not as peripheral concerns, but rather as the outer ramparts of our democracy. If they are toppled, then other core principles are suddenly placed in jeopardy. Once you have sworn off the need compromise, you are driven to defeat the enemy at all cost – checks and balances and institutional forbearance be damned. Once you have delegitimized your opponents, why not diminish the voting rights and legal privileges of their supporters? Why not combat elections by any means necessary, whether it be engaging in fraudulent activities or enlisting foreign interference to help you win them?

In sum, the findings to date of Bright Line Watch suggest that our Madison Initiative and the organizations we support have our work cut out for us when it comes to helping our political institutions, especially Congress, bear up in a time of polarization.

As we go about this work, we are grateful for how Bright Line Watch is monitoring and bringing data to bear on the debate about how the key principles of our democracy are faring. Judging by the extensive national reporting and commentary sparked by their recurring reports over the past three years, we are not the only ones being informed by their project. If the bright lines now at risk in our democracy are permanently sundered, it won’t be because we haven’t been warned.