I joined the Hewlett Foundation earlier this year after more than a decade in Washington, DC. My time in Washington was dedicated to many things, but a common thread throughout them was gathering lessons learned (on behalf of the Millennium Challenge Corporation (MCC) and the Center for Global Development)about design, implementation, and evaluation of U.S. development assistance programs. I learned a lot. But, two months in at the Foundation, it’s all about what I am un-learning. For example:

The amount of money you spend is not necessarily related to the influence you have. In Washington I got used to thinking about bilateral grants in the hundreds of millions of dollars, supporting direct investments for economic growth and poverty reduction. I wasn’t sure how I’d react to making grants in the millions (or less) here at the Hewlett Foundation. One month in, I am getting a sense of the big impact that smaller dollars can have. The secret is not just thinking about the scale of direct investments, but also what resources can leverage and signal.

Leverage can mean using grant resources to connect the dots along a chain. For example, supporting groups that generate data about whether kids are learning in school; funding community-based groups that use the data to advocate for better services; and supporting organizations that help build government capacity to use the data for policy-making. Leverage can also mean using anchor funding to attract other funders to a new idea, much more nimbly than bilateral and multilateral donors can.

Signaling matters too—when the size of the check is less important than the strength of the principles. The Foundation’s independence allows it to stick by deeply-held principles over decades, such as standing firm on a woman’s right to an abortion, or to combating climate change, no matter where the political winds blow. Or backing efforts to increase transparency—of government spending, aid dollars, or service delivery—long before transparency was the sexiest thing in development.

Evidence-based policy making isn’t quite the right ambition, though evidence-informed policy making is. I spent more than six happy years at MCC, a U.S. development agency that prides itself on data-driven, evidence-based decision-making. MCC uses transparent data to select country partners, prioritize investments, and measure results. This spirit really matters when it comes to allocating scarce resources and achieving impact in a cost-effective way. So I was a little wary of the seemingly less ambitious (and perhaps less rolling-off-the-tongue) phrase “evidence-informed policy making” used at Hewlett. After only two months, I am starting to see why it is good.

There is rarely a straight line from what data say to what policy makers do. And the more I learn about the quality of the data so many of us rely on, I realize how critical it is to pair data with a healthy dose of sound judgment about what can work in a given context.

The same is true for another kind of evidence: research. Participating in the recent Think Tank Funders Forum (TTFF) got me thinking about the research-to-policy link in two ways (the pictures are of visual facilitation of the meeting by Tim Hamons of Art of Awakening).

First is about “research quality.” Traditionally, people consider research to be of high quality if it is published in a respected peer-reviewed journal. But if the aim is to influence policy, academic quality is not all that matters—the research also has to be high-quality in terms of being relevant to a local context and to policy makers’ interests. The TTFF group also did much hand-wringing about how to get policy makers to “demand” and use evidence. I have been spoiled, coming from an agency so hungry to both use and generate evidence. It turns out the whole world is not like that, and the demand has to be generated. But how? There are no easy answers to any of this, which is why evidence-informedpolicy making is the appropriately humble ambition, even if it does sound funny! 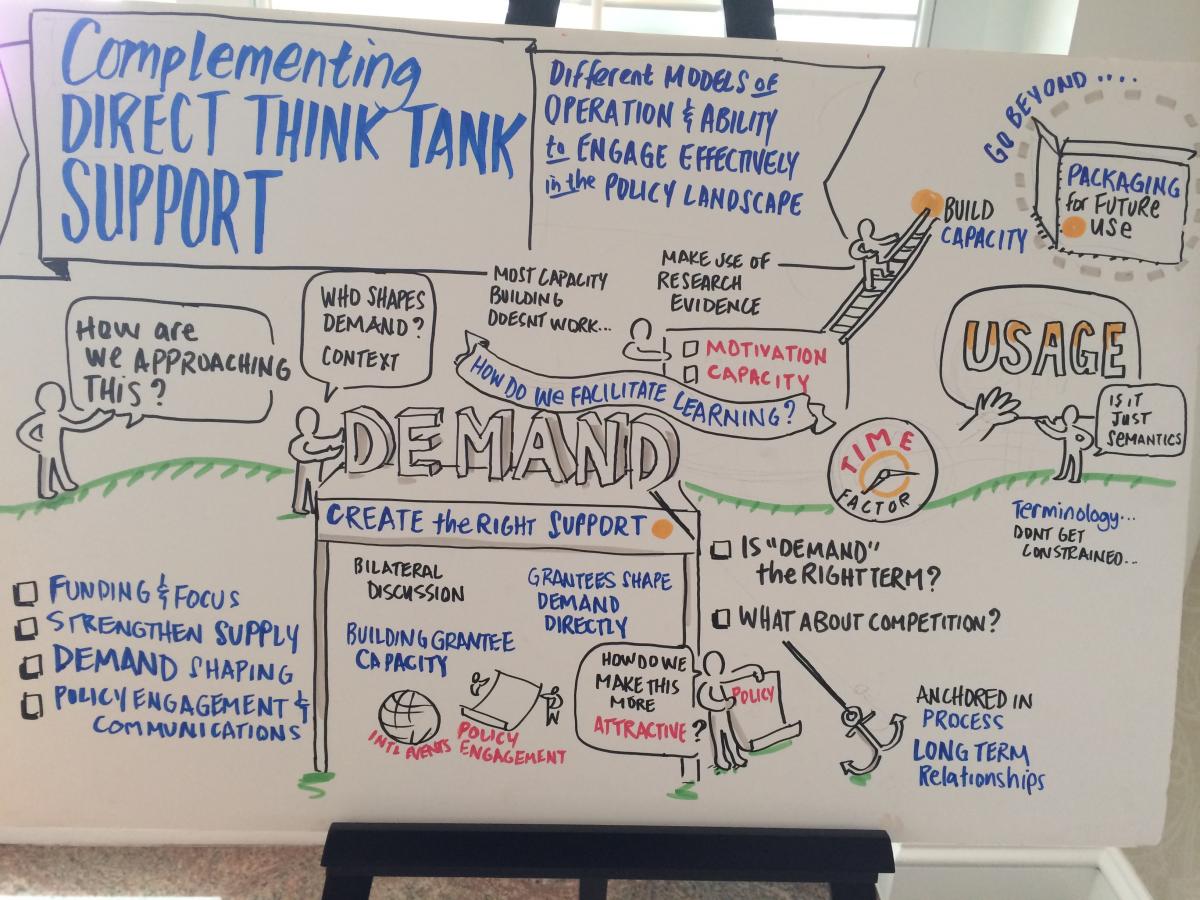 Big Brother is not everywhere. Emerging from a culture of strict oversight is unsettling. I frequently find myself asking: who has to clear on this? What’s our policy on that? Can I just do this? Anyone who has spent time at a federal agency can point to the policy that exists only because it was in response to an inspector general (IG) finding, or an approach not taken because “Congress doesn’t like it.” You learn to operate with radar for the IG, “The Hill,” the Government Accountability Office, “The Secretary,” the White House . . .

So the idea of a bunch of smart people pursuing opportunities based on their professional experience and consultation with other smart people, feels so, well. . . freeing! It also feels like a lot of responsibility. It means we have to hold ourselves accountable for taking the right amount of risk, staying sufficiently on top of our fields to recognize good opportunities, having the courage to dream big about what we can achieve, and setting our own bar for when to walk away from something that is not panning out. As Hewlett Foundation staff, we are of course accountable to the our Board of Directors and to the people and causes around the world we hope to help. From what I have seen, however, the Board actively promotes (indeed insists on) this glorious combination of freedom and responsibility—a charge that is both delicious and daunting. I am looking forward to settling into it more fully.

And here is the big one:

Washington is not the center of the universe. Sitting in the “center of power” of the “world’s largest economy,” it is easy to fall into thinking that most good ideas and influence come from Washington. You don’t actually want to believe this, and when pushed, probably can’t intellectually defend it. But it is a quiet undercurrent that makes its way into even the most globally-minded organizations. For those who’ve been sucked in by this, I encourage a good look at just two Hewlett Foundation grantees.

The Think Tank Initiative supports organizations with intellectual firepower in 22 countries in Africa, South Asia, and Latin America to pursue research and policy engagement tailored to their countries’ and regions’ development priorities. The African Center for Economic Transformation based in Ghana, just launched the 2014 African Transformation Report—African scholars using rigorous research to set a development agenda for Africa (a topic I covered more fully in an earlier post).

These are two of an increasing number of organizations that the Foundation is supporting to make a positive difference in their own countries in creative, and yes, evidence-informed ways. For years the development community has been looking for ways to better align development assistance with partner country priorities. Well, it’s time to look beyond our own capitals for ideas and use the ideas coming from those countries themselves as a starting point.