Budget showdowns, government shutdown threats, and partisan gridlock over federal spending bills have become common features of Congress’s annual budget process. But the 2018 federal spending bill, despite being another bulging omnibus, offers a narrow sliver of hope for change.

Tucked into that bill is authorization for a Joint Select Committee on Budget Process and Appropriations Reform, with a fast-track deadline for recommendations. Not surprisingly, even before the committee held its first public hearing on April 17, naysayers predicted it would be another victim of partisan polarization and accomplish nothing. Yet just establishing the joint committee was a step forward, as that required bipartisan approval, and the committee itself is structured for parity – four Democrats and four Republicans from each chamber. But what are its chances for success?

Success, for me, would be one or two modest steps forward, the kind that shift attitudes and momentum on Capitol Hill and become lasting, bipartisan legislative reforms. Sweeping or one-party action, on the other hand, would be contested and fragile. The structure of the joint committee and two below examples of work we support with funding from the Hewlett Foundation’s Madison Initiative, which provides grants to strengthen U.S. democracy, encourage me to be optimistic.

When the budget process works, other legislative processes do, too. Research into state legislatures conducted by the National Conference of State Legislatures (NCSL) suggests Congress may be on the right track in choosing the budget and appropriations process as a beachhead for reform. The February 2018 NCSL report, “State Legislative Policymaking in an Age of Political Polarization” underscores the importance state legislators ascribe to budget agreements. Tennessee legislators told researchers, for example, about the “importance for bringing both sides together on the budget, but also that it sets a precedent and provides an example on other issues.”

State legislatures, of course, differ from each other and from Congress in their constitutions (most of which require balanced budgets), fixed dates for legislative sessions, committee organization, and other structural frameworks. But these state experiences are not lost on Members of Congress, half of whom cut their political teeth as state legislators.

Bipartisan agreement on budget reform is possible. Another Madison Initiative grantee, Convergence Center for Policy Resolution, is known for helping large, diverse groups of stakeholders find their way through complex policy issues. It is not an advocacy organization, but rather helps advocates navigate their way to consensus on difficult problems. The Hewlett Foundation has supported a group of think tanks and scholars to develop budget process reform ideas, and they suggested using Convergence to find out which ideas could survive political reality.

Convergence tackled federal budget process reform head-on. It assembled a coalition of 23 strange bedfellows – hardened Washington hands from across the ideological spectrum who rarely agree on anything. The participants included Americans for Prosperity, Bipartisan Policy Center, Center for American Progress, Center on Budget and Policy Priorities, Coalition for Health Funding, Association of American Universities, U.S. Chamber of Commerce, and others.

Convergence set the bar high – unanimity, not majority approval, for adoption of an idea. The stakeholders didn’t check their personal beliefs, party identities, or special interests their organizations represent at the door. They vetted dozens of policy ideas, in effect previewing the concerns, objections and opposing interests the Joint Select Committee can expect to encounter. They didn’t give up when the process became uncomfortable, or difficult. They were supported by the Convergence facilitators and staff. 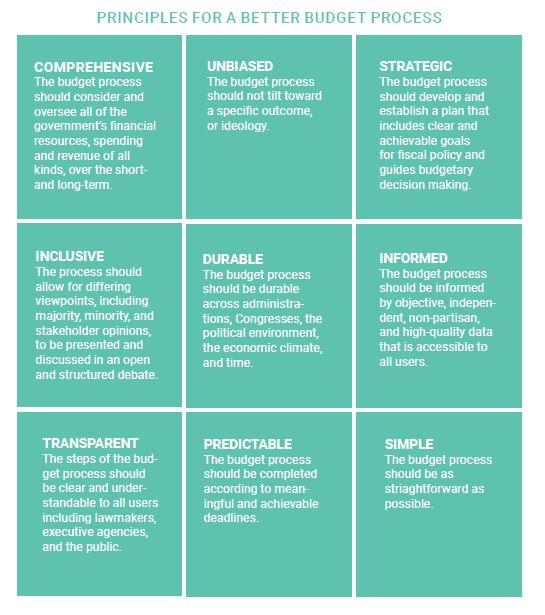 After more than a year of regular meetings, policy discussions, strong disagreements, and hard-knuckled negotiation, all 23 coalition participants agreed on a set of nine principles, four themes, and five reforms for the federal budget process.

When the Convergence project started in 2016, no one foresaw that its conclusions would coalesce in a report, “Convergence: Building a Better Budget Process,” just as Congress’s budget battles culminated in the omnibus spending bill that created the committee. Convergence and its coalition members are now briefing Members of Congress on their own experience and their recommendations.

If the Convergence coalition can do that, there’s hope for the joint committee.

Only one in 10 Americans supports Congress in recent polls, and a record number of House members from the majority party have already announced plans to retire. Regardless of which party controls the House and Senate in 2019, hyperpartisanship and polarization are unlikely to recede. But if it takes a cue from the states, or from special interest groups that are willing to find common ground, Congress may discover that the route to solving problems and regaining public support starts with coming together around its constitutional power of the purse.