We’re living in a new economic reality: the era of low oil prices. The price of Brent crude (an international benchmark) began dropping late last year, and bottomed out at under $50 a barrel in January—a number not seen since the depths of the financial crisis in 2009. While prices have rebounded somewhat as the summer driving season approaches, people whose business it is to know don’t see the price of oil rising consistently above $100 anytime soon.

Drops like that have a big effect on what U.S. consumers pay at the pump—the average gas price Americans paid last June was $3.85 dollars a gallon, and it got all the way down to $2.17 by January. In some countries, including many in Europe, heavy taxation buffered the global price crash, and in others, including Indonesia and India, governments took the opportunity to remove fuel subsidies to consumers.

What did Americans do with the money they saved on fuel? Some took it as an opportunity to spend more on bigger cars—the demand for SUVs and trucks rose 40% in December. But for many others—including many young people—the dramatic changes just aren’t that relevant. They’re already choosing to live less of their lives in their cars. And they’re part of the supply and demand equation that’s behind the new era of low oil prices.

On the supply side, it’s clear that an oil boom in the U.S., with production increasing rapidly since 2010 in the Bakken formation in North Dakota and the Eagle Ford formation in Texas, has played a role. As has OPEC’s (the Organization of Petroleum Exporting Countries) decision not to curtail their own production, which has made for abundant supplies on the world market.

What about demand? Put simply, oil consumption is decelerating. In the short term, China’s low economic growth in the last year reduced their demand below project levels. And taking a longer view, actual U.S. oil consumption over the past ten years has been significantly below earlier projections.

What’s happened in United States (still the largest consumer of oil in the world) has been nothing short of a revolution—a quiet one, but one that could have big implications for the future: Since the Great Recession, the U.S. has experienced the de-coupling of economic growth and the number of vehicle miles travelled. 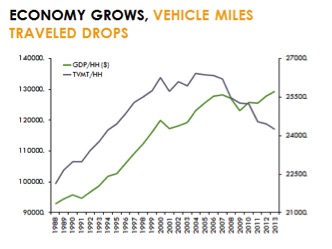 As you can see in this graph from the Shared-Use Mobility Center, from the 1980s and until the crash of the economy in 2008, vehicles miles traveled tracked closely with economic growth—and of course economists based their projections of oil consumption on the continuation of that trend. During the recession both lines turned down sharply. But something changed after 2009: even after the recovery started, Americans continued to use their cars less.

What’s behind this dramatic change? The answer lies in the choices young Americans are making. They drive less; take transit, bike, and walk more; and prefer city-center living and walkable communities where there are multiple choices for mobility. According to a report from the Frontier Group and the U.S Public Interest Research Group called Millennials in Motion, these trends have been accelerating for the past decade. But other trends, many of them technology-enabled—things like car sharing and ridesourcing—are just beginning to have an impact, while demonstrating that we can use less oil, use fewer vehicles more efficiently (and emit less carbon in the process) and improve individuals’ financial well-being, all at the same time. Every person who takes a job where they can bike to work or chooses to live in a neighborhood where they can walk to a grocery store is making a micro-decision that contributes to a macro-level impact on the international price of oil.

What can we, as a community interested in sustainable transportation, do to keep these trends going in the right direction? Will political developments force the price of oil up, or will further, technology-aided changes—autonomous vehicles, for example—push the next generation even further away from individual car ownership? What will happen now when the high gas price is no longer a motivating factor for using less? These are the questions keeping advocates, grantmakers, and experts up at night. The drivers of this quiet revolution have been technology, generational change, costs—but little in the way of policy, which is where those who would like to see these trends continue should focus their efforts. Effective policy to sustain and deepen these trends is what will turn this quiet revolution into a noisy one!