The Meaning of Madison

Last week we announced the formal launch of the Hewlett Foundation’s Madison Initiative, our effort to help support and improve the health of representative democracy in the United States. You might be wondering:  why Madison? Let me walk you through how we arrived at this name and why we feel it is especially fitting.

When we started planning this work a year ago, we referred to it as the Democracy Initiative, only to learn that several progressive organizations were already using that name to describe their collaboration on democracy reform. So we started calling it the Democratic Process Initiative. To this, some of our conservative friends pointed out that the phrasing could inadvertently suggest that our work was somehow aligned with the Democratic Party. As we prepared for our formal launch, it was clear that we needed to put some more thought into what we would call the effort.

All the while we were continuing to sharpen the focus of our plans, zeroing in on Congress and the central role it is called upon to play in our system of government: representing, aggregating, weighing, and reconciling different and often sharply opposed beliefs, ideas, and agendas. But as our former Communications Director Eric Brown pointed out, a name like “the Representative Government Initiative” doesn’t exactly roll off the tongue, much less leave people wanting to hear more.

In our brainstorming sessions, as we talked about the ideas, values, and dynamics we wanted to shore up, we kept invoking James Madison’s name. He famously spoke to the inevitability of faction and partisanship in a free society and the corresponding imperative to rein in their excesses; to the importance of a system of representation that would “refine and enlarge the public views, by passing them through the medium of a chosen body of citizens;” and to the need to rely on ambition to check ambition, thereby “supplying, by opposite and rival interests, the defect of better motives.”

Most importantly, the extended sphere and institutional complexity of Madison’s system of government were meant to foster precisely the kind of deliberation, negotiation, and compromise that we believe are in increasingly short supply. As Jonathan Rauch observed recently in “Rescuing Compromise,” his must-read essay in National Affairs, “Madison understood something that many political commentators forget: Politicians, like other people, compromise because they have to, not because they want to. So he modeled a system that would compel them to bargain.”

We also observed how Madison’s own leadership exemplified this ethic of compromise. He entered the Constitutional Convention seeking to realize the Virginia Plan that he had worked out in advance. However, during the ensuing negotiations, he came to accept the need for a design that departed from it in ways he had profoundly opposed, a compromise solution for which he nevertheless became the leading advocate. Likewise, after initially arguing against the call for a separate bill of rights, Madison recognized that it would be required to secure the ratification of the Constitution and subsequently worked to shepherd the necessary amendments through the first Congress.

The more we talked about it, the more we collectively converged on the Madison Initiative as the name that, in a nutshell, best captured what we are trying to do. Having aimed high with our branding, we now have our work cut out for us to make good on it. Onward!

Madison Initiative
We depend on well-led and well-managed grantees 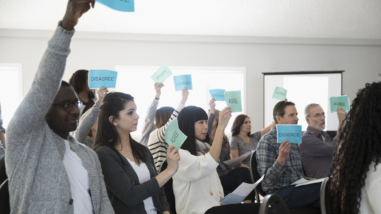 Madison Initiative
Watching over the bright lines of democracy