In the movie The Matrix, the main character, Neo, is offered two pills: a red one, which will show him the painful truth of life outside the Matrix; and a blue one, which will erase all memory of what has occurred and send him back to blissful ignorance within it. Sometimes I feel that trying to understand gender and development issues, we’re all Neo, working inexorably towards our own moments of choice. A word of caution: once you look at the world through the lens of gender-based differences in power and opportunity, you can never unsee it.

Today, Bread for the World launched its flagship 2015 Hunger Report. This year’s edition focuses on women’s economic empowerment, tackling issues that are at the forefront of gender and development. Poverty affects women differently than men. Working conditions, discrimination, and social norms mean women and the work they perform (both within and outside the economy) are less valued then men and their work. Women experience more poverty in terms of income, and are also more impoverished in other ways—education, health, time.

Nowhere is this clearer than in the burden of domestic work. Women and girls are usually responsible for what is sometimes called reproductive work, such as taking care of family, cooking, and cleaning. More women have joined the workforce, but men have not stepped up at home, so overall women work more and get paid less. The upshot is that many women (particularly in low-income countries) work double shifts, one of which one is unpaid.

Bread for the World’s report also highlights the importance of collective action. A critical element of empowerment is voice, and women who advocate collectively for their rights are more likely to be heard.

Perhaps most important, the 2014 Hunger Report draws a very clear picture: Women are missing from economic data. We just don’t know how and how much women are contributing to the economy, since most of their work is undervalued, invisible in the statistics, or both. This is not a data gap like many others we worry about in global development; it’s a reflection of systemic gender-bias, and it prevents sound policy-making.

To accompany their report, Bread for the World launched a powerful visualization tool to illustrate how women are missing from data.

The tool allows you to search by country, region and five main indicator categories: public life, human rights, health, education and economic participation. Each indicator – such as mortality rate or wage gap- is represented by a pixel, and all the pixels together make up the picture of a woman. The more data available, the clearer the image. The conclusion is stark: in most cases we can’t see the women, and so the visualization imparts a powerful message: without the data, women can’t be seen. And if they can’t be seen, how can women have a voice and a seat at the table where economic decisions are made? 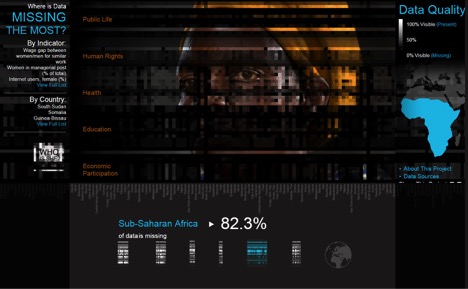 (As an aside: This tool was created at a hackathon, and initially set out to visualize data on women’s economic empowerment. It ended up taking a much more novel approach by visualizing the absence of data, rather than the data itself. It cost the organization no money other than the costs of organizing the hackathon—a great example of how innovation and creativity can go a long way in the face of limited resources.)

Bread for the World has always included women in their reports. After all, the role that women play as caregivers and farmers puts them at the center of the hunger issue. However, this year’s report doesn’t just include women as research subjects; rather, it examines the social constructs and the gender biases in policies that hold women back, and impede development. You could even say that Bread for the World has come to their moment of choice and decided to take the red pill, applying a gender lens to their work and seeing for the first time behind the “Gender Matrix.” Like Neo waking up to his revolution, there is no going back.