My name is Daniel, and I have a Twitter problem.

I am one of the 288 million active users of the site. I recently realized that I have been too active.

The moment of truth came a few weeks back while I was driving around doing errands with my family. While we were stopped at a light, I snuck my phone out of my pocket and started scrolling through my feed, something that had increasingly become my habit when bored. My 11-year-old daughter busted me from the back seat. “Dad, are you texting someone while you are driving?” I quickly reassured her that I was just on Twitter, and anyway the light was red. My spouse was seated next to me in front, and in the midst of this shameless performance, I saw her left eyebrow rise up. I shoved my phone back into my pocket, the light changed, the car behind us honked, and we drove on.

But the moment stayed with me. It reinforced a growing sense that Twitter was distracting me in ways and at times that I shouldn’t allow. I had to admit that the man who had once taken pride in carefully reading and note-taking his way through the 69 volumes of The Papers of Woodrow Wilson for his dissertation research was now often waylaid before he could skim a three-paragraph blog post.

I contemplated going cold turkey. But as a grantmaker, I have found Twitter to be a highly efficient way to follow the activities and perspectives of current and potential grantees and co-funders—not to mention researchers and observers offering unconventional wisdom on the issues we care about. And it is a way for me to share what I am thinking and reading, not a bad thing given the value the Hewlett Foundation places on transparency.

So in the spirit of being helpful to others out there who might be wrestling with similar issues, here is my self-designed six-step recovery program:

1. Delete Twitter from my smartphone. This step has made the biggest difference by far, as it has more or less eliminated the mindless use of Twitter—not to mention the temptations that had me setting a very bad example for my children.

2. Cap the number of accounts I follow. I have gone from following more than 800 feeds at the height of my addiction down to a self-imposed cap of 200 today. If I add a new account, I stop following another. This has me making more intentional choices about whom to follow.

3. Puncture the filter bubble. In pruning my feed, I took care to keep and in some instances to start following people who see things differently than I do, including a few who routinely tick me off. I realize that if at any point I can’t identify such antagonists, then I am in the bubble.

4. Use the “lists” feature to organize my feed.  This lets me group who I follow into categories and thus make more intentional choices about what I am seeing in my feed. If I want to read political scientists parsing President Obama’s budget, I don’t need to sort through sports columnists debriefing whether the Seahawks should have given the ball to Marshawn Lynch—or vice versa.

5. Read before retweeting. This step slows me down so that I can actually process the rich information in my feed, and it ultimately helps me be more respectful of my tweeps. On a related note, if I say something is a “must read,” it really should be!

6. Make a list of a dozen books I need to read this year – and read one each month. Part of moving away from habits that have gone bad is replacing them with better ones that will help me get back on track. While I don’t want to drop Twitter altogether, I realize I need to renew my capacity for sustained reading and reflection or it will atrophy.

As the saying goes, I am trying to take things one day at a time.  Thanks for listening. Would anyone else out there in the Twitterverse like to share their ideas for coping with this challenge?

Environment
Why the United States should build back better: A call for post-COVID, climate-forward policy 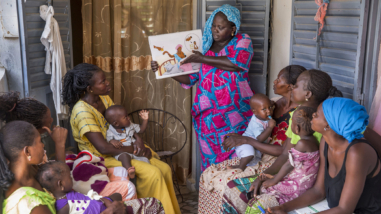 Global Development and Population
Q&A with Leticia Corona: Learning with funders about diversity, equity, and inclusion in international grantmaking

Global Development and Population
Data in the time of COVID-19: Six ways to reconcile data use and data rights