By Mariana Mazzucato, Founding Director of the UCL Institute for Innovation and Public Purpose
July 27, 2022

We are living through multiple crises: a global financial crisis, climate change, and the coronavirus pandemic, not to mention the geopolitical crisis. In each case, we seem to be stuck in a reactive mode, cleaning up messes rather than charting a strong path forward. Indeed, the way that modern economics frames the state makes it reactive by design: At best, it’s there to fix market failures, constantly patching and filling gaps.

At the UCL Institute for Innovation and Public Purpose (IIPP), which I founded in 2017, our goal is to rethink the state’s role in capitalist economies as a market shaper, not a market fixer, and to develop the new theory and practice that underlies this agenda, with public value and public purpose at the center.

This requires, first, highlighting the obvious: Growth has a direction. That direction can lead to a financialized economy, or to an economy driven by investment and innovation that leads to a more inclusive and sustainable growth path. The last three decades have been dominated by the former path, with the financial sector financing itself (finance, insurance, and real estate) and the business sector extracting value through share-buybacks meant only to maximize share prices. But to deliver the latter — which is our goal — we need a new economic movement that begins in the first instance by challenging the notion that states should only fix markets.

At IIPP, we have set up a Mission-Oriented Innovation Network (MOIN) that brings together global public organizations to share the challenges and opportunities of stepping outside the box of fixing markets. Participants in the network and its events include public banks, like the European Investment Bank; innovation agencies, like the U.S. Defense Advanced Research Projects Agency; and agencies at different levels of government, including city-level agencies like the one in Barcelona trying to develop a mission-oriented approach to urban strategy.

The first — but not the last! — of our regional networks is MOIN USA, which brings together public-sector organizations and public banks at federal, state, and local levels. MOIN USA aims to support participants in implementing a “missions approach” to public policy — designing procurement, industrial, and innovation policies centered on moonshots that can catalyze investment and innovation across multiple sectors to deliver on public goals.

This new framing for public organizations asks not what market failure needs fixing, but how to shape the markets of the future. We use a framing I first developed in “The Entrepreneurial State,” and further in my book “Mission Economy,” called ROAR: focused on new explicit routes that tilt the playing field toward achieving goals (the R); new organizational capabilities that foster experimentation (the O); new dynamic assessment tools outside of static cost-benefit analysis (the A); and new ways to share rewards, including through equity stakes or conditionalities (the second R).

We have used ROAR to help set up new organizations or design new policies. After helping the European Commission redesign their innovation policy around missions in 2018, IIPP later drew on our collective research and expertise to help the Scottish government develop a Scottish National Investment Bank, aimed at providing long-term, patient finance to organizations working on key public goals, like reducing the digital divide. This approach is not governments favoring specific sectors, or even individual companies, through tax breaks or subsidies, but instead, governments setting a direction and building a coalition to achieve it. I call this picking the willing, not picking winners.

We have recently also thought about how policy levers like tax breaks can be used in support of this approach of picking the willing by examining the implications of a public-purpose-oriented approach for taxation. In collaboration with the Biscay Government in Bilbao, Spain, we helped implement fiscal policies that deliberately align with the Sustainable Development Goals (SDGs). The SDGs have been used to set a direction for the region’s development through its tax policy, identifying a series of key areas against which companies must report. We launched this report at the end of June in Biscay, with the governor of the region. In addition to the report, we recently concluded a lecture series on walking the talk on the SDGs, which explores the state’s role in creating public value and innovation.

The set of collective challenges now facing us — including climate change, the digital divide, the challenges spotlighted by the COVID-19 pandemic, and others — means that we can no longer afford to leave things to chance or design them to be reactive, fixing and patching things up. They illustrate just how hollowed-out states have become, leaving them reliant on the private sector for both funding and expertise, with delivering public value sometimes far behind the goal of private profit. In a publication we co-authored with the United Nations Development Programme (UNDP), we looked at the way in which parts of the world that did better during the pandemic — including Vietnam, Rwanda, Togo, and the Indian state of Kerala — did so on the back of key investments in public-sector capabilities.

Relatedly, the World Health Organization’s Council on the Economics of Health For All, an all-woman council that I chair, operates on the principle that we can channel and shape public and private investments in health for all in order to achieve global cooperation toward supranational goals. This means having a mission approach to health for all and organizing the economic system to deliver on it — for example, the mission is not developing vaccines but instead vaccinating the entire world.

Implementing this approach means making sure intellectual property rights are structured to not be too wide, strong, and upstream, and designing public-private partnerships that truly share knowledge in a way that fosters collective intelligence — rather than the rent-seeking I study in my book, “The Value of Everything.”

To reach our goals, we must explore how we collectively finance, govern, and value health, and the pathways needed to create a whole-of-society approach to achieving health for all. Building an economy for health is not simple, but it is also not impossible if we reframe how we understand the role of the public sector. We must also train the next generation of leaders and develop a new curriculum for global civil servants, one that eliminates the old-school notions from Public Choice Theory and New Public Management that continue to paint government as, at best, a market fixer, while also convincing many that government failure is more dangerous than market failure. Undertaking this work will be crucial to reimagine capitalism in both theory and practice. 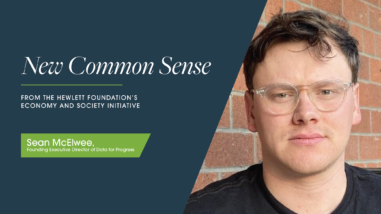 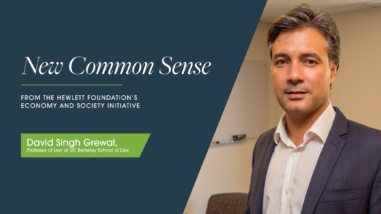