Ali Noorani is the Program Director of U.S. Democracy at the William and Flora Hewlett Foundation. He leads the investments to strengthen democracy through our Trustworthy Elections and National Governing Institutions grantmaking.

Ali joined the foundation after serving for 14 years as President and CEO of the National Immigration Forum in Washington, D.C., where he was notable for his creative coalition building — working with and bringing together unlikely allies to promote the value of immigration. After serving in leadership roles in public health and environmental positions in Boston, Ali led the Massachusetts Immigrant and Advocacy Coalition from 2003 to 2008.

He is an Emerson Dial Fellow, a fellow at the Arizona State University Social Transformation Lab, has participated in the Hemingway Writer-in-Residence program and is a member of the Council on Foreign Relations. Ali is also the author of two books, Crossing Borders and There Goes the Neighborhood, and holds a masters in public health from Boston University. He is also a graduate of the University of California, Berkeley, and serves on the board of More in Common. 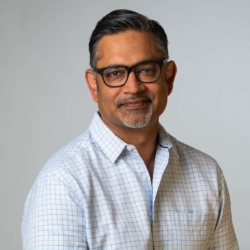