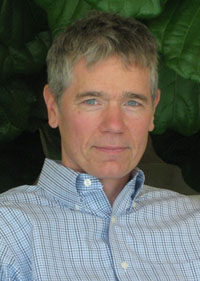 “Foundations” is a series of informal question-and-answer sessions with employees and others affiliated with The William and Flora Hewlett Foundation to give them an opportunity to explain their work.

Before joining the Foundation in 2005, he was director of information and communication services at the University of California, Office of the President. Earlier in his career, Collins directed two academic data centers: the California Census Research Data Center at UCLA and UC Berkeley, and the National Data Archive on Child Abuse and Neglect at Cornell University. He serves on the Nonprofit Technology Network’s board of directors; the Foundation Center’s board of trustees; and advisory committees for TechSoup, GuideStar, and the Council on Foundations. Collins received a bachelor of science degree from Cornell University and a master of business administration degree from the Haas School of Business, UC Berkeley – both with honors.

How has information technology changed grantmaking at Hewlett since you’ve been here?

One example is our shift to online grants administration, which has large implications. When I arrived, we were very much a paper-driven organization in how we managed our grants. There was a hard copy of each grant file, available to only one person at a time. With a program staff like ours that travels all over the world, that could be a real problem. They needed to be able to see and work with those files wherever they were. With our new online system, grantees can get paid and all the many steps in grantmaking can move forward regardless of where a staff member is. He or she could be sitting in a café in Nairobi.

Going online has also revolutionized reporting requirements for our grantees. When grantees submit their reports through the Web, the reports automatically go into our workflow system, and all of the right information is updated automatically. Putting this process online has dramatically reduced the turnaround time for reports at the Foundation.

And that, in turn, has changed life for our support staff. They used to spend a great deal of time uploading grantees’ documents and coding information in the database. As we began to move documents online, we looked for tasks that could be automated or eliminated to free people for higher-level work. We have really talented people, and we don’t need them doing unnecessary or repetitive work with documents. That’s been both a boon to efficiency and a really popular change.

Are there other elements of grantmaking that you’ve been able to change?

The submission of proposals from those seeking grants is one place. Let me give you an example of the difference that’s made.  We recently completed a project to put the proposal submission and approval process online. We launched an online system on a Monday in March. That day, an organization electronically submitted its documentation for a grant. By that Friday, the grant was ready to be awarded. The award letter, which used to go out in the mail, was emailed. In twenty-one minutes, the grantee countersigned, scanned, and returned the document. We estimate that this awarding and signing process alone used to take two weeks.

Again, this makes a difference for the staff. The old system of grant approval used to be like walking a labyrinth. The new system is like using TurboTax®: it guides you from step to step. We apply all the logical conditions that need to be met along the way – if this, then that – in the background and ask only the relevant questions, automatically filling in the information. We’re letting technology do the things it can and having people handle only the things it can’t. That’s the name of the game.

How common are these practices at other foundations?

It varies. We’re pioneers in one sense. Many foundations use a program called GIFTS to manage their grants. But we’re building custom user interfaces for the GIFTS program so that our staff and grantees can interact with it more easily.

This is far cheaper than building a whole system and much faster. We’re able to build components so people can interact with GIFTS and roll the components out one at a time. GIFTS does a lot of things for us, but doesn’t have an online portal for grantees to submit information or for staff to process reports. Other foundations have added some of this functionality, but we’ve taken it further.

If you ask grantmakers what new features they want in software to manage grants, the number one thing is greater interaction with grantees on the Web so they can be more efficient. Second on their list is an electronic workflow internally. This allows tasks to occur in parallel: approvals can happen simultaneously instead of moving from desk to desk along a single path. It offers a lot of efficiency.

One thing I want to do is to incorporate information about the underlying strategy behind making a grant into the grantmaking software. This way, when a program officer made a grant, she or he could see it in the context of other grants awarded to achieve similar goals and also the program’s overall grantmaking strategy. Beyond that, it would be great to add features to measure progress toward the goals of the grant.

Beyond the grantmaking process, how else has information technology changed the way the Hewlett Foundation works?

The big advance is videoconferencing. Hewlett makes grants to fight climate change, but our staff also travels a lot, which contributes to the problem. We do other things to mitigate our energy consumption, like constructing a LEED-certified building for our offices and buying carbon offsets every year. But the single best thing we can do is reduce our air miles. We want to practice what we preach.

To date, we’ve made about forty of these grants. The impact is much greater than simply saving the Hewlett staff travel miles. Videoconferencing has created a lot of opportunity for our grantees. For example, the Energy Foundation was one of the first grantees to get a videoconferencing grant. It installed its equipment just before opening a Beijing office and has used it every week since to reduce travel and improve communication between the two offices. Eventually, videoconferencing gets woven into everything the organization does, from recruiting and training to collaboration.

There also are networks of grantees that now use this technology in a variety of innovative ways. One uses it for postdoctoral training of fellows in South Africa who work with a university in the United States. Some of our grantees in international development now have access to video calls with institutions like the World Bank that they previously couldn’t participate in.

One important condition of these grants is that those who receive this capability make their facilities available to any other Hewlett grantee. We have a list on our Web site of all the cities worldwide where our grantees have installed videoconferencing. *

There still are obstacles. We pay for all the equipment, but we don’t pay for the Internet bandwidth, and that cost can vary greatly from place to place. This is a particular problem in Africa, where bandwidth is still quite expensive and sometimes low quality.

We’re about to commission an outside evaluation of the videoconferencing grants we’ve made to see if this program has been as successful as we think. If so, it may be something that we want to share with other grantmakers.

Are there areas in which information technology can have an even greater impact on philanthropy?

I’d say in the creation of standards for philanthropic data. I recently participated in a Council on Foundations task force that focused on this very question. The consensus was that the creation of such standards is a big opportunity.  The Foundation Center has standards for the data it collects, but beyond that, there really aren’t any well-established, broadly accepted ones for philanthropy. And yet there is more and more need to exchange data, to visualize it, and to map it.

The Foundation Center has begun to provide some leadership in this. It’s working on a geographic taxonomy so grantmakers can use a standard to identify where their grant dollars are at work. To date, most have relied on information about the locations where grant dollars are awarded. You might have a grantee with offices in Washington, D.C., that does its work in Africa, so that only tells part of the story. It’s one example in which standards and technology help tell the story of philanthropy.

Mapping has the potential to do much more. The ability to overlay demographic and other types of information with data about where grants are being made has real potential to inform decisionmaking. If you want to target your resources where they are most needed, and you can see a map of various social and demographic indicators, you can identify areas that are not being served.

The Foundation Center is working on this nationally, using a range of geographic and socioeconomic data down to the county level and matching it with grantmaking. You can see what these maps look like using the platform they’ve developed, called Philanthropy/In Sight. Here at Hewlett, the Performing Arts Program is exploring something similar with a grant to create an online map of cultural assets in the San Francisco Bay Area. I expect we’ll see more of this sort of thing. Visualizing data is extremely powerful.

What do you see looking out at the next three to five years?

One of the biggest impacts of information technology in the nonprofit sector in the past few years has been in fundraising. Charitable donations are down overall right now, but online giving is up. That’s going to expand and continue, with more money being raised through text messaging on mobile phones.

And you’ll see mainstream media linked more and more to opportunities to give or become involved: through television shows and social media. Technology will be woven into more and more of the ways we work.