Social media has become Millennials’ top source for politics. A great new study by the Pew Research Center, released this week, finds that a solid 61% of Millennials say they get political news from Facebook, versus just 39% of Baby Boomers. Gen Xers like me bridge the gap at 51%.

“Millennials and Political News” is based on data collected in 2014 through the Center’s American Trends Panel which, full disclosure, the Hewlett Foundation’s Madison Initiative helped support. The study offers a range of interesting findings:

The study’s findings regarding generational differences in social media use, news and politics raised important questions for me, and are relevant to those who are analyzing and working to improve civic information and engagement:

Millennials’ reliance on Facebook for political news has clear implications for political candidates – and for campaign spending.  As I’ve noted before, experts estimate that only about 3% of campaign ad dollars are spent on digital – maybe more in presidential elections. In the future, this is obviously bound to grow – but how rapidly and by how much and? Millennials still punch below their weight in terms of voter turnout, but as they age (and, presumably, vote more) this trend towards social media will have an impact.

We should expect to see even more micro-targeting. During the 2012 elections, the New York Times noted how “in recent primaries, two kinds of Republican voters have been seeing two different Mitt Romney video ads pop up on local and national news Web sites.” A former campaign manager for President Obama recently noted of his experience with U.K. elections – where social media are already dominant given much tighter regulations on campaign finance and ad buys – that “Facebook and other social media, was the most effective because it was often a message shared by their friends or others they trusted versus politicians and the media that they don’t trust. We found that the undecided voters were moving our way as a result.”

What does the trend toward social media mean for the finances of already beleaguered media platforms? And for campaign regulation?  Local TV has been one of the few journalism platforms to see increasing ad revenues in recent years, while newspaper and magazine revenues have cratered. This is in large part because of political advertising, which tends to happen on news-producing local TV stations. What will happen to the sustainability of local TV news as campaign advertising and communication are increasingly transferred to social media intermediaries rather than news content producers?  And, with television traditionally positioned as the primary channel for campaign communications, current campaign finance laws and regulations are heavily oriented around broadcasting.  The FEC has struggled with how to regulate this shift toward digital campaigning.

Millennials may be living in less of an echo chamber – for now. The jury is still out on what role social media plays in determining who sees what news (even if unconsciously). In the Pew Research survey, only 18% of Millennials who pay attention to political posts say the posts they see on Facebook are “mostly or always in line with their own views” (versus 21% of Gen Xers and 31% of Baby Boomers). Twitter and Facebook algorithms remain proprietary. Recent and hotly contested research by Facebook’s data scientists finds that the biggest determinant of what news you see is who your friends are, rather than a social media algorithm, and for most people only about 20% of “friends” are from an opposing party. Earlier 2010 research (below) makes similar suggestions regarding the role of the internet, versus other media and interactions (e.g., with personal acquaintances), in influencing “ideological segregation.” That said, if the aforementioned Facebook study is right, algorithms may cause as much as a 4% to 10% decrease in ideologically “cross-cutting” exposure on that site.  While not a huge amount, that means Facebook – if willing – could make itself part of the solution to echo chambers, rather than part of the problem. 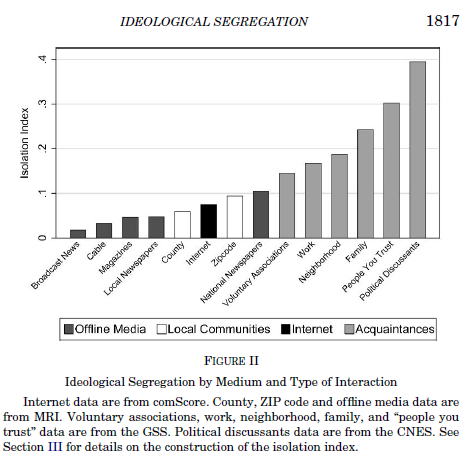 What does the rise of social media mean in the long term for an informed and engaged citizenry? The folks at Pew Research Center note how hard it is to understand: “The [social media] experience is individualized through one’s own choices, through the friends in one’s network and their proclivities, and through algorithms – all of which can change over time.”  As they report, we are just starting to understand these interactions, and the implications they will have for American politics.