When Fay Twersky and I started in our roles with the Hewlett Foundation’s Effective Philanthropy Group (in 2012 and 2013 respectively), we heard again and again that there was less funding available for infrastructure – the essential tools, networks and supports that foundations and nonprofits need to improve their practice – than there used to be. Many we spoke with asked if we would increase our infrastructure funding budget.

These requests were one key reason we helped launch a collective funding effort, the Fund for Shared Insight, to gather and focus funding on supporting learning and improvement in the philanthropic sector. But they also got us thinking about the data on infrastructure funding. We work regularly with other infrastructure funders, but we wondered if we had a complete picture of the funding environment. Was infrastructure funding really decreasing, and if so, to what extent?

To answer the question, we commissioned the Foundation Center to analyze nearly a decade of their FC 1000 dataset (2004-2012), which includes grants of $10,000 or more awarded annually by 1,000 of the largest private and community foundations in the United States. The report examines the grants in the dataset that are explicitly for nonprofit and philanthropic infrastructure support. Notwithstanding some limitations in the dataset, we have learned a lot from this analysis. We plan to support the Foundation Center to update the report with 2013 and 2014 data next year. You can find the full report on the Foundation Center’s website, and read a blog post about it by Foundation Center Director of Research, Steven Lawrence, as well. The report is openly licensed under Creative Commons because we hope others will use it in ways that support their work.

Here are some highlights from the report:

Funding dips and rebounds. U.S. foundation support for nonprofit and philanthropic infrastructure totaled over $1 billion between 2004 and 2012. Funding has fluctuated over that period, reaching a high of $136.2 million in 2006 and dropping to $100.6 million in 2010 after the recession. In 2012, it was $134 million – nearly back to the high water mark of the period studied in this report. So it’s not surprising that grantees were reporting to us in 2013 that there was less funding for infrastructure – it was still rebounding from the lows seen after the recession. We will need a few more years of data to see if the upward trend since 2010 continues.

Philanthropy is growing, but infrastructure funding isn’t keeping pace. While the total dollar amount of infrastructure funding is nearly back to 2004-06 levels, infrastructure funding has decreased as a percent of total giving because overall giving has grown during the period.  In 2004-2006, infrastructure funding was 0.65-0.85% of total giving – but then it dropped for five straight years to under 0.60%, and only got back to 0.60% in 2012. Not only has giving increased over the last decade, but the number of foundations and nonprofits has grown substantially as well. There were 66,000 foundations in 2004 and there are over 100,000 today (Foundation Center). The number of public charities grew 29.6% in the decade since 2002, with 963,243 registered public charities in 2012 (National Center for Charitable Statistics). This means there are many more foundations and nonprofits to use and engage in the infrastructure and many new organizations on one of the steepest parts of the learning curve. 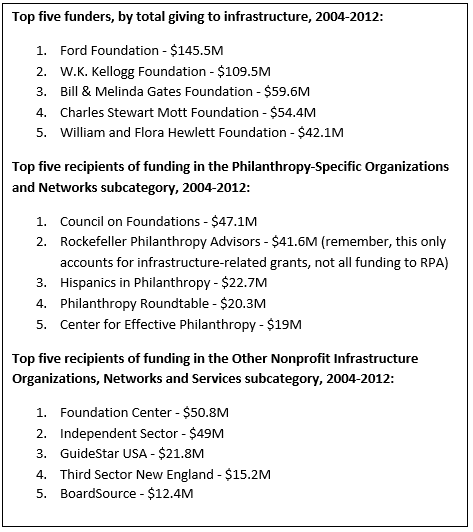 So what does this all mean?

First of all, it does not mean that organizations appearing in this report – the top five or even the top 20 – don’t need additional support. They all have significant goals and need our continued (and increased) support to do the work they do. Organizations not appearing on the list do as well.

For funders who support infrastructure, we hope this report offers you a more detailed context in which to orient your funding.

For nonprofit and philanthropic infrastructure organizations, hopefully this data puts your experiences with funding into context and helps as you plan for the future. 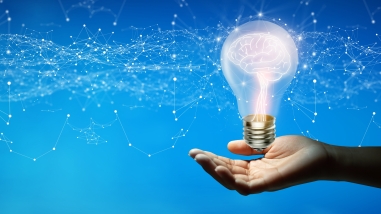 Effective Philanthropy
Soaring interest in diversity, equity, and inclusion: How funders seek and use knowledge