Friday Note: We Haven’t Even Gotten to the Hard Stuff

Not long ago, during a discussion about progress for girls and women around the world over the past twenty years, I found myself doodling on a napkin. The conversation was organized around the twelve areas of action articulated in the 1995 Fourth World Conference on Women in Beijing, China. Since I have trouble keeping twelve things in my head at once, I was doodling to see if I could make some sense by lumping, sorting and sequencing the items:

education and training of women

women and the economy

women in power and decision-making

institutional mechanism for the advancement of women

women and the media

women and the environment

Pen in hand, I first tried to rank these in order of importance. But that was plainly impossible. How could it be more important to be healthy than to lead a life free of poverty? Is it more important to take part in political life or to have access to the media? These are all important in fundamental ways, and intertwined. 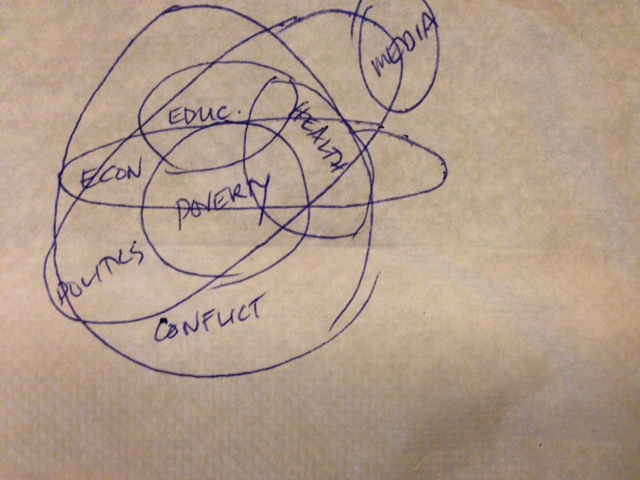 Ah, intertwined. I tried a Venn diagram, the refuge of the “everything’s connected” school of understanding the world. I tried to depict the areas where, for example, the incidence of poverty among women intersects with education, health, and economic opportunity. With a few pen strokes I had an impressively tangled set of overlapping bubbles, but no clarity at all.

Time for a new napkin. The next attempt was to array them along some imaginary axis of “progress achieved.” We’ve made more progress in ensuring equality of educational opportunities than in protecting girls and women from violence, for example, so maybe I could find some pattern that way. 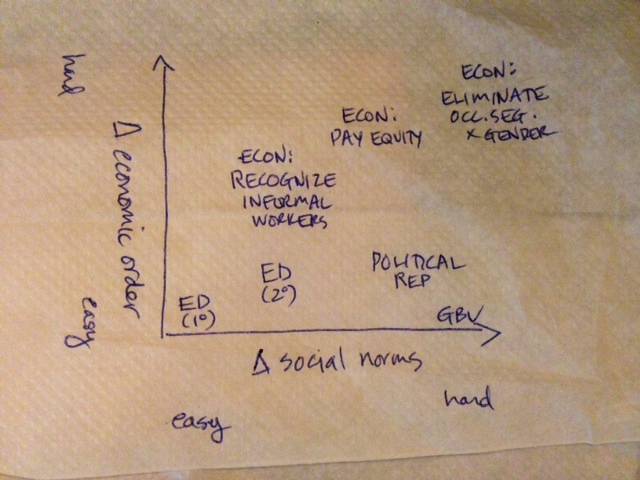 Think about gender parity in primary school enrollment, for example. The tremendous gains we’ve seen over the past two decades have not been easy, and it’s still an uphill battle to make sure girls make it through primary school and into secondary school. But as economies have become less dependent on family labor on farms, sending young children to school is not fundamentally disruptive to the social or economic order. So, notionally, let’s start with primary education plotted on the part of the graph closest to the origin. For the heck of it, let’s put gender parity in secondary education a little further along the “change in social norms” axis and a step or two up along the “change in economic order” axis, because with secondary education women are better able to compete in the labor market.

Now, where to put preventing gender-based violence? That’s a heavier lift, and requires a recalibration of power and vulnerability within society, and particularly within households, where much of the violence occurs. While there are economic aspects to violence—women whose movement is restricted have less ability to work outside the home—progress requires more of a change in social norms than in productive opportunities that are afforded women. So let’s put it further along the “change in social norms” axis.

One more: women and the economy. More specifically, how about something really tough: opening up traditionally male occupations to women. What constitutes “women’s work” and “men’s work” is among the most deeply held beliefs in any culture, so we’ve got to put that toward the extreme end of “requires a change in social norms.” And “men’s work” is almost invariably better paid, so a breakthrough on occupational segregation by gender requires major changes in the economic order in a society—changes that mean women are not cast in the role of the reserve labor force, the invisible producers. So I’d put that way up in the far right-hand corner of my diagram: difficult in both dimensions.

This is by no means a perfect framework for understanding why some aspects of women’s lives and livelihoods progress faster than others. But it helps me think about what some of the barriers to progress are. And it inspires me to work harder, with Data2X, the WORLD Policy Analysis Center, WIEGO, and other partners, to measure just how far we have to go, and how fast we’re making gains.