As part of our commitment to openness and transparency, the Hewlett Foundation shares data about the demographics of our staff and board, as well as our grantees.

The data below are drawn from surveys of the Hewlett Foundation staff, who number approximately 120 people, all based in the San Francisco Bay Area, across program, administrative, and investment teams.

Categories with respect to gender and race reflect how individuals self-identify. In recent years, the foundation has expanded its survey to additional aspects of identity so that staff can participate more fully. This includes, for example, options to choose multiple categories and new questions related to race and ethnicity, expanded categories and questions for gender identity and orientation, and a new question about ability. 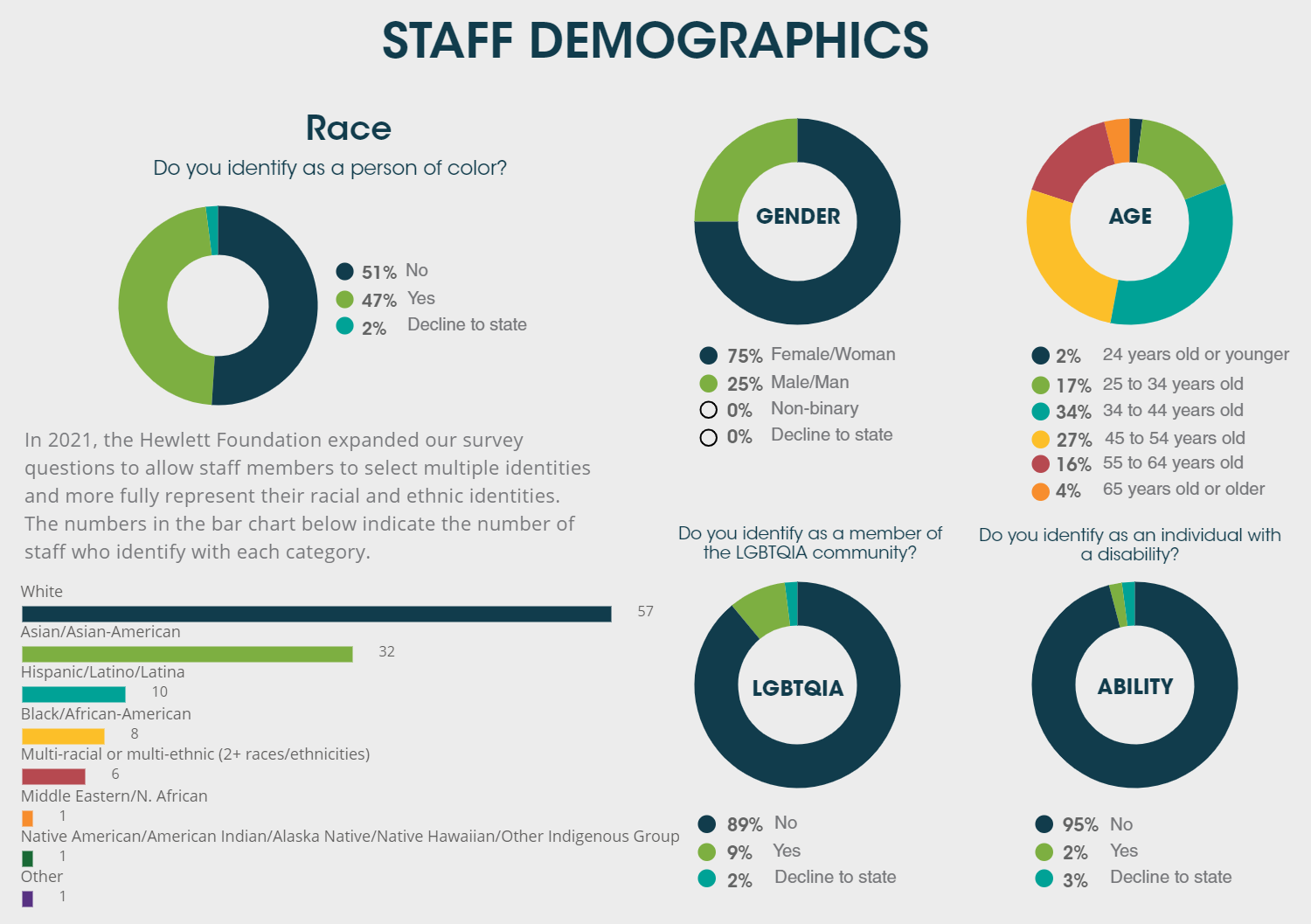 As of July 2021, 47% of the foundation’s staff self-identified as a person of color and 51% did not; the balance is roughly similar among senior staff (see below). More specifically, among senior staff:  57% identify as white, 21% as Asian/Asian American, 14% as Black/African-American, and 7% as Hispanic/Latino/Latina. This continues a trend of racial diversification among staff: In 2016, for example, 39% identified as non-white and 59% as white, and four years earlier, 31% non-white and 69% white. (In 2021, in keeping with changes in best practices in research, the foundation added a new question to specifically ask if staff self-identified as a person of color).

Trends related to gender have remain roughly unchanged in recent years among the staff overall.  As of July 2021, the foundation’s staff is 75% female and 25% male; in 2016, the staff was 73% female, and 27% male. And in 2008—when we began collecting this data—it was 75% female, 25% male. Among senior staff, 57% identify as female and 43% identify as male. In the 2021 survey, no senior staff member identified as a member of the LBTQIA community, as transgender, or as a person with a disability 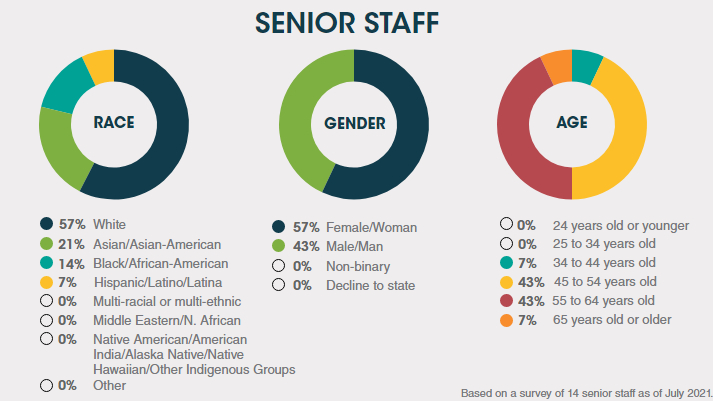 The Hewlett Foundation board comprises 13 members, excluding the president. As of July 2021, 38% of board members self-identified as a person of color and 62% did not; four years earlier, the board was 31% non-white and 69% white. As of July 2021, the foundation’s board is 54% male and 46% female; whereas in 2017, the board was 69% male and 31% female. In the 2021 survey, no board member identified as a member of the LBTQIA community, as transgender, or as a person with a disability.

In 2011, the foundation adopted new policies related to board membership. Four board members must be linear descendants of William and Flora Hewlett; there must be at least five but no more than 11 additional, independent board members. All but one of these board members serve three-year terms, with a limit of four terms. One of the family slots is for a “special director,” typically from the next generation of Hewletts, who serves a single two-year term.